Are you seeing the DPF warning light?

Welcome to the surgery, the DPF Doctor will see you shortly…

A blocked DPF is usually a SYMPTON of a fault with your vehicle – not the CAUSE. The key to long term DPF happiness is identifying and rectifying any underlying issues (the CAUSE) before initiating a cleaning process. A DPF clean on it’s own will probably not solve your DPF issue(s). At Tony Fowkes Automobiles, we’re proud to be a part of https://www.the-dpf-doctor.com/ – a network specializing in DPF diagnostics and blocked DPFs. We’ll diagnose the root cause of your fault(s) and get you back on the road as soon as possible, saving you money against expensive repairs and replacements.

Diesel particulate filters – more commonly known as DPF’s – have been fitted to modern diesel vehicles since approximately 2008. Their purpose is to reduce soot particulates and to predominately meet stricter emission levels. Whilst they do a good job, problems can occur causing them to block prematurely. When this happens, you will usually get a warning light on the dash signalling a problem either by a DPF light and / or an engine management warning light.
The key to successful DPF repair is accurately diagnosing the DPF problem and any underlying faults that have caused the problem. We will advise you of the reason for your DPF problem, fix it and then give you some honest advice on how to get the best out of your DPF equipped vehicle. We carry a vast range of diagnostic tools – many at dealer level – and have a wealth of DPF experience.

We carry out an in depth analysis of engine management, DPF values and general health and function of the engine before initiating a DPF clean. It is critical the key components and sensors are functioning correctly. Where necessary, further investigation is carried out to ensure a successful clean.

We access the DPF and carry out an intensive deep cleanse of the DPF unit. Using our specialist cleaning system, a carbon cleaning solution is injected into the pre DPF pressure line and a soak period is initiated. The engine is then run at a fast idle allowing the fluid to clean the carbon content in the DPF. This is then followed by a further injection of a cleaning flush solution during an engine fast idle cycle and we carry out the flushing process twice.

We carry out a thorough road test of the vehicle whilst also incorporating a regeneration of the DPF at the same time.
Confirmation of the regeneration, final assessment of DPF pressure readings and final checks of Engine Management System are then carried out.
These readings, before and after are then reported back to you for your peace of mind. The three stage DPF cleaning process is now complete.

This great little video shows how DPF’s work and also demostrates the 3 stage cleaning process we use. It also gives tips on preventative maintenance.

What is a diesel particulate filter?

A diesel particulate filter (DPF) is a filter that captures and stores exhaust soot (some refer to them as soot traps) in order to reduce emissions from diesel cars. But because they only have a finite capacity, this trapped soot periodically has to be emptied or ‘burned off’ to regenerate the DPF.

This regeneration process cleanly burns off the excess soot deposited in the filter, reducing the harmful exhaust emission and helps to prevent the tell-tale black smoke you used to see from diesel vehicles, particularly when accelerating.

Euro 5 exhaust emissions legislation introduced in 2009 to help lower car CO2 emissions effectively made DPFs mandatory, and since then, around one in two new cars a year have been diesel-powered.

What is regeneration of the DPF?

Regeneration is the process where excess soot deposited in the filter is cleanly burned off.

There are three types of DPF regeneration: passive, active and forced.

Passive regeneration takes place automatically on motorway-type runs when the exhaust temperature is high. On passive cycle, the DPF will require the car to regularly be driven significant distances at relativey steady revs of 1,750rpm to 2,500rpm for the DPF to get hot enough to regenerate and burn off the particulates in it. Many cars don’t get this sort of use though so manufacturers have to design-in ‘active’ regeneration where the engine management computer (ECU) takes control of the process.

Active Regeneration occurs when the Engine Control Unit (ECU) takes control of the process. The ECU makes small adjustments to the fuel injection timing to create hotter than normal exhaust gases to burn off particulates in the DPF. However, this does not always work, particularly if the car has done a high proportion of short runs from cold starts and instead of burning off the particulate, the extra fuel can instead find its way into the engine sump, contaminating the engine oil and sometimes leading to such a rise in sump oil level that the engine can start to run uncontrollably on its sump oil and will self-destruct.

An alternative ‘active’ cycle – favoured by some manufacturers – is an additional injector that injects either diesel fuel or an additive directly into the system.

If a DPF is severly blocked, the vehicle may go in to ‘limp mode’ and should be seen by us as soon as possible to ascertain the extent of the problem.

A forced regeneration involves using a computer program to run the car, initiating a regeneration of the DPF. This will often require changing the engine oil & oil filter.

How do I tell if my diesel particulate filter is blocked?

If the DPF is becoming clogged with soot or a fault develops in the system, an orange light will typically appear on the dashboard as seen below: 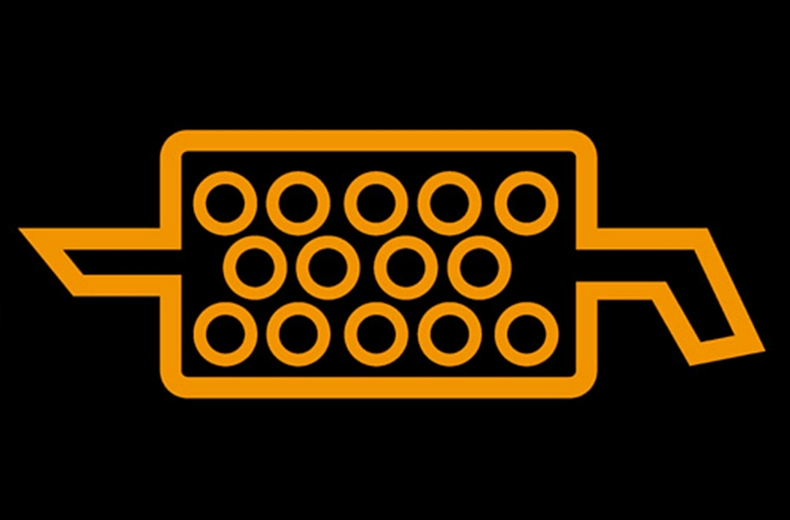 They usually look like this with a piped box that has dots in the middle, although they can vary slightly between manufacturer and manufacturer – check your handbook for more information.

If this happens, the best thing that you can do is immediately take the car out on a dual carriageway or motorway for 25 minutes of continuous driving at 60 mph to give the DPF an opportunity to regenerate.

If the light goes out after an extended drive then the DPF has successfully regenerated. However, if the light remains illuminated, the filter is blocked and a DPF clean may be necessary in this case.

If you ignore the warning light and continue driving in stop-start traffic at a slow pace, expect other warning lights to illuminate and for the car to eventually go into ‘limp home’ mode to prevent further engine damage.

DPF blockages are a sympton of an underlying cause. There are numerous causes and the absolute crux of professional DPF repair is rectification of the cause.

Short journeys at low speeds are the prime cause of blocked diesel particulate filters.

This is why car makers often go as far as recommending city-bound short-hop drivers choose a petrol car instead of diesel (and it’s why diesels are something of a rarity in the city car sector).

Other things that are bad for DPFs include poor servicing. A diesel particulate filter on a poorly serviced car may fail sooner than a well maintained one. Generally, they should last for at least 100,000 miles.

It’s important you use the right type of oil as well – using the incorrect oil for your vehicle can harm and block the DPF.

Performance modifications can damage a diesel particulate filter, as can using low-quality fuel and even running the car frequently on a low fuel level as the car may avoid DPF regeneration in order to save fuel.

OK, my filter is blocked and doesn't seem capable of regeneration, what do I do?

If your warning light continues to stay on, turns red, or additional DPF or engine management lights come on, do not leave it too long before getting it checked out.

More damage can be caused this way and what could be an inexpensive fix can become something much more expensive.

We can clean 95% of the blocked DPFs we see, using our 3 stage process as detailed above.

This usually costs £299.99 inc. VAT. If a vehicle has a healthy engine, has been regularly serviced, has no engine management faults and no software issues, we can guarantee the cleaning process.

What is the cost of a new diesel particulate filter?

Diesel particulate filters are very expensive. A new one from a car manufacturer can cost anywhere from £1,000 to £3,500, potentially wiping out the cost savings associated with driving a diesel.

As cars age, the cost of the replacement DPF could be more than the value of the car – and it is older, higher mileage cars that are most likely to require a new DPF.

We have a 95% success rate when cleaning DPF’s with our 3 stage cleaning process. We very rarely have to replace the DPF itself.

Is it illegal to remove a diesel particulate filter?

Yes, it is illegal. Owners face fines if caught (up to £1,000 for cars and £2,500 for vans) and removing a DPF will also be an MOT fail and can also invalidate your car insurance policy.

Tony Fowkes Automobiles competitive Workshop and Bodyshop is based in Park Royal, London. We have been servicing and repairing vehicles for our loyal customers for over 45 years.

This website uses cookies to improve your experience while you navigate through the website. Out of these, the cookies that are categorized as necessary are stored on your browser as they are essential for the working of basic functionalities of the website. We also use third-party cookies that help us analyze and understand how you use this website. These cookies will be stored in your browser only with your consent. You also have the option to opt-out of these cookies. But opting out of some of these cookies may affect your browsing experience.
Necessary Always Enabled

Any cookies that may not be particularly necessary for the website to function and is used specifically to collect user personal data via analytics, ads, other embedded contents are termed as non-necessary cookies. It is mandatory to procure user consent prior to running these cookies on your website.